I don’t make smoothies as often as I would like.  For some reason, I’ve convinced myself they take too much time, they’re too messy, and they won’t keep me full.  Those arguments can be true, but there are also so many simple ways to get past them.  And this smoothie covers them all.

First off, it’s probably the easiest smoothie I’ve ever made, so there goes the time argument.  As for the messiness, there’s still a blender to clean (a kitchen task I irrationally dislike and build up in my own mind), but other than that, it’s one butter knife and two glasses.  Not such a big deal.  My final issue with smoothies is they don’t always keep me full until lunch.  This is mainly an issue during the school year, when I eat breakfast very early and generally have about five hours until lunch.  By using protein-packed Greek yogurt and almond butter, this smoothie helps combat that.  I really like to freeze my yogurt in 1/2 c. servings for smoothies.  I just pop the frozen yogurt portion into the blender with the other ingredients, which means I can eliminate the need for ice and get a much thicker, creamier texture.  When all else fails, I can make a smaller smoothie and pair it with a whole wheat English muffin or piece of toast.  That usually does the trick.

Even with all those great reasons to get back on the smoothie train, I’ve got one more, even better though–this smoothie is just plain tasty!  With almond butter and cinnamon, the flavors are different than most other smoothies, which keeps breakfast interesting and, yes, I’ll say it, quick, easy, and filling. 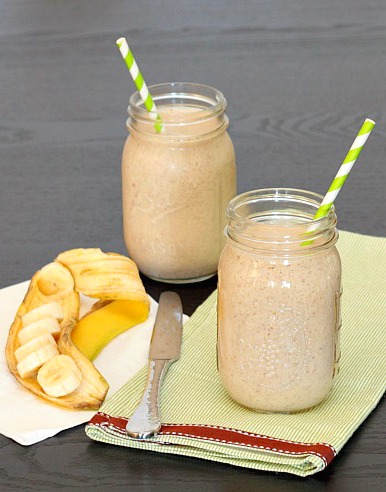 Directions:
1.  Place all ingredients in a blender and process until smooth.  If desired, adjust amounts of almond milk or ice.