School’s out, the temps are up, and school’s out.  Did I mention that?

To celebrate the end of the school year and kick off a well-deserved summer break, I decided to host a casual get together.  I invited a handful of current and former coworkers and friends with the cutest invitations from Tiny Prints.  They’d contacted me about teaming up for an event after I used their invitations for my sister’s baby shower.  After a few e-mails and a very pleasant phone meeting, I knew I wanted to use one of their new glitter invitations.  They look like they have real glitter on them, but they actually don’t.  Instead of little pieces that fall off in the mail, scratch the invitation, and get everywhere when you open the envelope, the glitter is a high-resolution image that captures all the sparkle of the real deal. Pretty cool!  I chose the Light and Liberty invitation for the classic color combination and super fun sparkler motif. 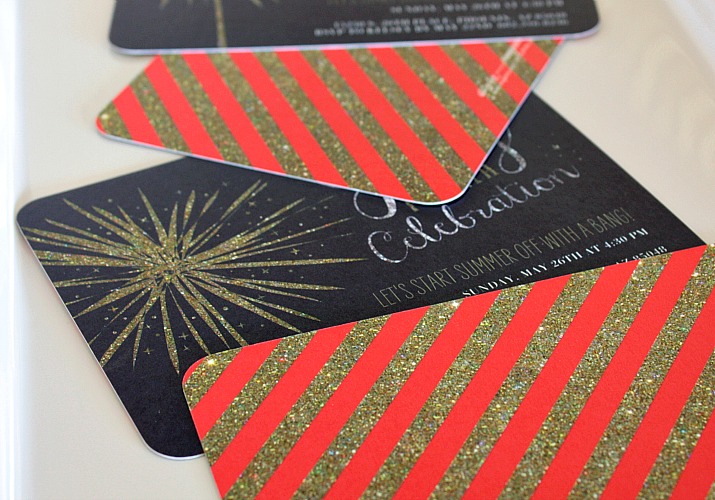 I didn’t want the party to be fussy.  I mean, we’re teachers unwinding from a a stressful and exhausting school year!  To keep it all low key, I used minimal decorations–just a couple of lanterns and Mason jars with sand and sparklers.  I put a small arrangement in the entry way, another behind the plates and flatware, and three sparkler jars down the buffet table. 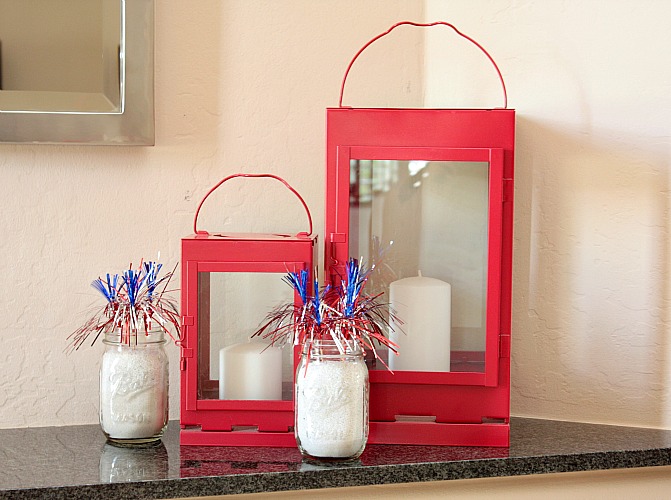 In keeping with the casual vibe, I put water bottles, soft drinks, and beer in three separate coolers and placed mixers with the straws, cups, and a marker for labeling on the kitchen island.  I wanted my guests to feel free to help themselves. 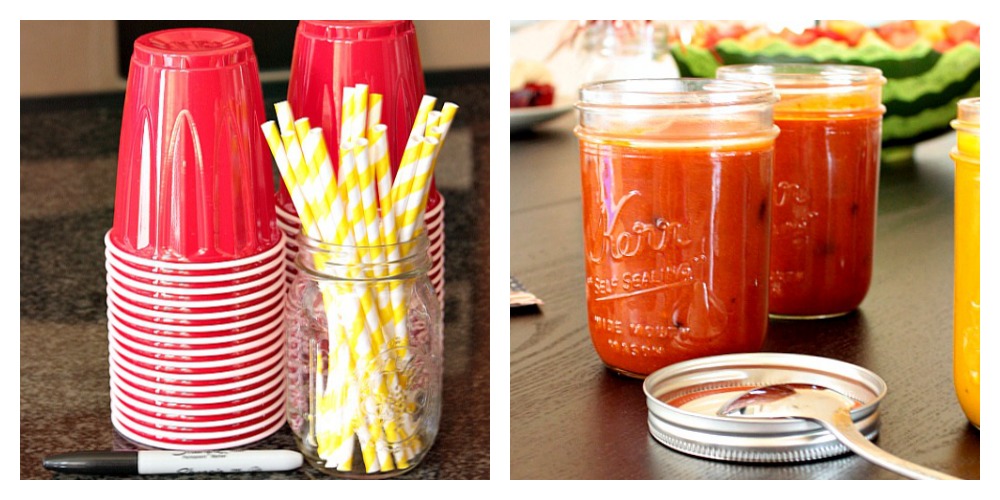 I also had all the food out on the table just before my guests arrived.  I arranged everything to avoid traffic jams and let my guests load up their plates in a logical order.  The plates, napkins, and flatware were in a nook behind the table.  The first thing on the buffet were the buns, followed by pulled pork and chicken served straight from the slow cooker.  Next to that was two different kinds of homemade barbeque sauce–maple-chipotle and Carolina Gold (recipes coming soon) with the jar lids serving as simple and practical spoon rests–followed by my classic coleslaw.  After all the sandwich fixins, I had jars of homemade pickles (which were a huge hit), a couple of bowls of chips, fruit salad, and my favorite red velvet cupcakes.

Based on the amount of laughs and cupcakes eaten, I’d say the party was a success.  We definitely started summer off with a bang in the best possible way.

Tiny Prints provided the invitations for this party, but I was not compensated otherwise.  All opinions and comments are my own.