Do you ever have those nights where the meal you carefully planned out and shopped for just doesn’t sound good anymore?  I definitely do.  Usually, one of two things work for me–either push it to another night that week or just suck it up knowing you hate wasting food and you’ll probably love the finished product.  Sometimes neither trick works.

After pushing my original intentions back two nights in a row and realizing the only perishable items from my original plans were apples, which I was bound to eat anyway, I decided to go out on a limb and make up a hash from ingredients I already had on hand.  It turned out to be exactly what I was hoping for–hearty, slightly spicy, and super simple.  I know I’ll be having this one time and again. 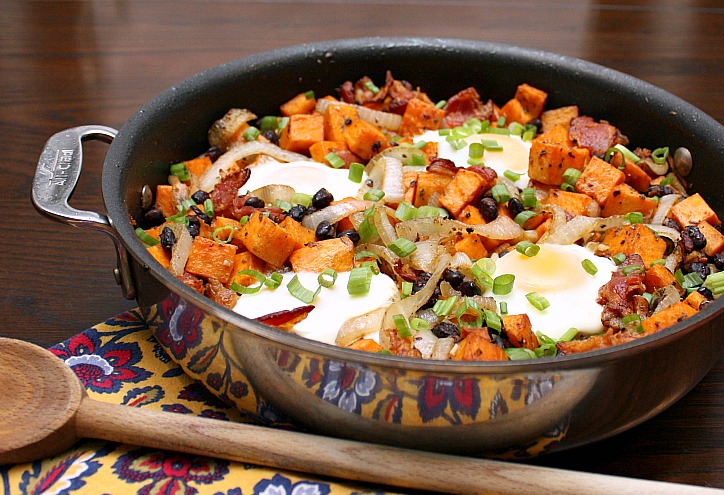 an “Apple a Day” original

2 medium sweet potatoes, peeled and cut into 1/2-in. cubes

1.  Preheat oven to 400 degrees F.  In a small prep bowl, mix together salt, pepper, chili powder, cumin, and chipotle flakes, if using.  (If using chipotle in adobo, reserve until next step.)  Set aside.

2.  In a large bowl, toss sweet potatoes with olive oil, chipotle in adobo, if using, and half of seasoning mixture.  Spread on a rimmed baking sheet and roast just until beginning to soften, 10 minutes.  Leave oven on.

3.  Meanwhile, in a large ovenproof skillet over medium heat, cook bacon until crispy.  Remove bacon and place on a large plate lined with paper towels.  Reserve bacon grease in skillet.

4.  Add onion to pan and sauté in bacon grease until becoming translucent, about 5 minutes.  Add in sweet potatoes and remaining seasoning mixture.  Sauté 3 minutes more.  Finally, add black beans and 3/4 of bacon and cook until just warmed through, about 2 minutes.  Taste and adjust seasoning, if necessary.

5.  Make four wells into hash and crack an egg into each one.  Place skillet in oven and cook until egg whites are cooked but yolks are still runny, 5-7 minutes.  Remove skillet and garnish with remaining bacon and green onions.  Serve immediately.  Serves 3-4.