When I was first learning to cook for myself, I generally steered clear of dishes that combined two seemingly different types of cuisine.  I thought it was because I was unfamiliar with some of the ingredients, couldn’t find them, or couldn’t afford them.  Back then I was more apt to stick with flavors I knew would work out.  Things have changed.

First of all, I’m fortunate that I don’t still have the budget I did when I was 24.  Secondly, I’m much more confident with my cooking and much more secure in knowing I (most likely) won’t ruin a pricier ingredient.  Most importantly, I’ve done a lot of thinking about food and food cultures.  That thinking has lead me to this realization–there are certain dishes that permeate through cultures.  They can have small changes or significant differences, but the basic idea of the food is the same.  Take quesadillas, for example.  They differ so much, even throughout Mexico and South America.  But what happens when you go to France?  Well, the tortillas are swapped for crepes and the fillings become even more varied.  (And really, who’s going to argue with a Nutella-filled crepe?)  What about pizza?  Practically every culture has their own version of a thin bread or cracker topped with anything and everything available.

So where does that leave these tacos?  Tropical chicken tacos, to be exact.  Tacos with coconut in them.  Tacos I probably would’ve passed over just seven or eight years.  Well, I now know that pineapple is used in plenty of Mexican and South American dishes, so that’s not exactly cross-cultural.  I’m also thankfully aware that, as our world gets smaller, our palettes expand.  And I’m so glad for that because these tacos were outstanding, particularly with our favorite grapefruit margaritas.  They’re good for you, were very simple to make, and used easy-to-find ingredients–a win in every way possible. 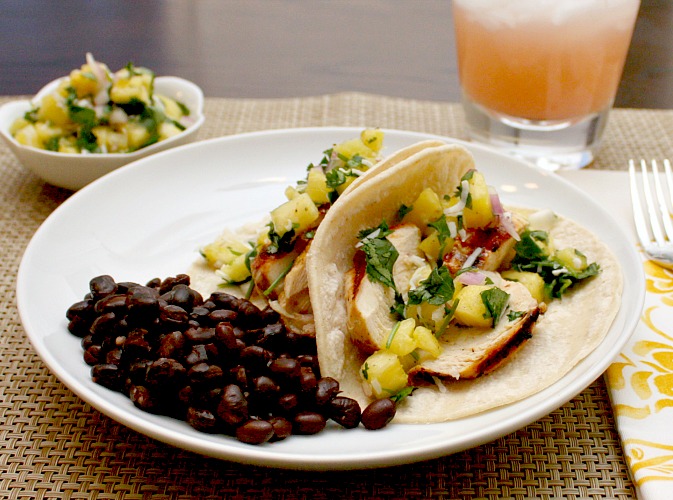 1.  In a large mixing bowl, combine half minced jalapeños, coconut milk, 1/4 c. onion, 1/4 c. pineapple, chile powder, 1/4 tsp salt, and black pepper.  Add chicken and marinate at room temperature up to 30 minutes or up to eight hours in the refrigerator.

2.  To make the salsa, combine remaining jalapeños, pineapple, onion, and salt with cilantro and coconut.  Cover and refrigerate until needed, up to one day.

3.  Heat a grill pan on medium-high and brush with oil.  Remove chicken from marinade and transfer to pan.  Discard marinade.  Cook chicken, turning once, until cooked through and marked with grill lines, about 12 minutes.  Remove chicken from pan and place on a cutting board.  Let rest 5 minutes.