Holy cow was this stuff good.  I’m leading with that.  Not particularly eloquent, but completely accurate.

I wasn’t going to share this until the end of next week because I already had other recipes scheduled, but after one bite, it got moved right on up.  It’s that good.  I’m talking “make it this weekend” good.  It’s “you won’t even care that your fingers get all sticky” good.  Yum, yum, and yum. 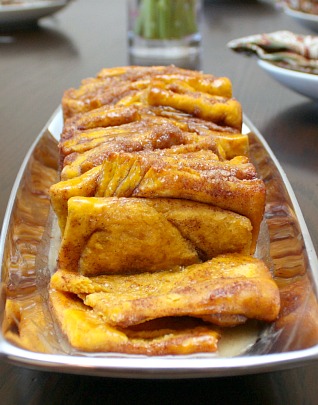 I will say this bread takes a considerable amount of time, almost entirely due to the two rises it requires.  Because I was serving it for an early autumn brunch, I actually made the bread the night before and glazed it about 45 minutes before we ate.  You could also place the dough in the refrigerator as described in the recipe.  Let me tell you, it was so tough to look at and smell that warm bread–very reminiscent of a pumpkin cinnamon roll–and not be able to start pulling apart the layers right then and there.  Still, you will have to exercise a certain amount of self-control and allow the bread to cool some.  If you don’t, the layers won’t stick together as well.

I made a couple of tiny adaptations to the recipe as I first saw it on Sunny Side Up in San Diego.  First, I added cloves to the cinnamon-sugar mixture.  I also made the glaze with bourbon instead of rum.  For me, exercising self control in not eating the bread straight from the oven was enough.  I knew I couldn’t resist the pumpkin and bourbon combination, as well.  I didn’t need all the glaze, but I’ve left the quantities as they are in the original recipe so you can decide how much you want to use.

If you love these flavors and fall baking as much as I do, do yourself and your family a favor and make this.  I promise it will because a favorite fall treat for your family like it already has for mine. 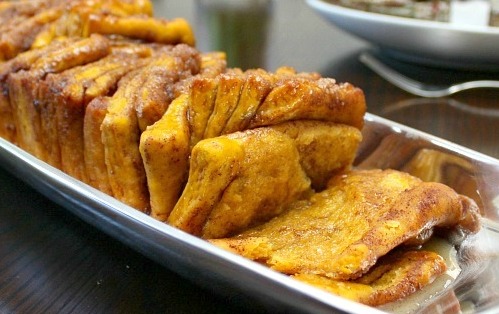 from Sunny Side Up in San Diego, Willow Bird Baking, and Joy the Baker

For the cinnamon-sugar mixture:

1.  To make the dough, brown 2 TBSP
of butter over medium-high heat.  It will bubble; keep stirring so it browns evenly.  When it reaches a dark honey color,
remove from the heat and pour into the bowl of a stand mixer to
cool.

2.  Turn the heat to medium-low and warm the milk until it
bubbles.  Remove from the heat and add it to the butter in the mixer bowl.  Allow the mixture to cool to 100-110 degrees F (use a
candy thermometer to check).  Set the saucepan aside for another use
later.

3.  Once cooled to the appropriate temperature, stir the sugar and yeast into the milk/butter mixture and allow the yeast to bloom, 6-8 minutes.  (The top should look foamy and the liquid cloudy.)

4.  Stir in pumpkin, salt, and 1 c. flour.  Fit the mixer with the dough hook.  Add the rest of the flour 1/2
c. at a time, stirring until flour is just incorporated between each addition.  Knead on low speed until smooth and elastic, 4-6 minutes.

5.  Place dough in a lightly greased bowl and cover with plastic wrap or a cloth.  Allow to rise in a warm place, 60-80 minutes, or until it doubles in size.  (After this rise, you can put it in the refrigerator overnight to use it in the
morning.  If you do, let it sit out for half an hour before rolling.)

7.  To assemble the bread, punch down dough, then turn out on a floured work surface and knead dough 1-2 minutes.  Let dough rest for 5 minutes.  Sprinkle more flour onto your work surface and rolling pin.   Roll dough out to a 20×12-in. rectangle, lifting corners periodically to make sure it’s not sticking.
If dough doesn’t roll easily, allow to rest 5 more minutes.

8.  Sprinkle the cinnamon-sugar mixture over the dough, patting it down
to help it stick.  Generously grease a 9×5 loaf pan.

9.  With the long edge of the rectangle toward you, cut it into 6 strips (Tip–cut the rectangle in half, then cut each half into thirds.)  Stack strips on top of each
another, turn dough so the short side faces you, and cut into sixths. Place stacks vertically into pan, pressing them against each so they all fit. Cover pan with plastic wrap or damp
cloth and allow to rise in a warm place, 30-45 minutes more.

12.  To make the glaze, bring butter, milk, and
brown sugar to a boil over medium-high heat.  Remove from heat and whisk in the confectioners’ sugar and bourbon until smooth.

13.  To assemble, use a butter knife to loosen the bread from the pan.  Turn loaf out on to a plate, then place serving platter on top and flip.  Drizzle with desired amount of glaze and serve.

one year ago: focaccia with Elly