It’s been unseasonably hot here (108 on the first day of fall!) but at least the mornings and evenings are becoming more enjoyable.  This may sound silly to some of you, but an 80 degree mornings and evenings feels just heavenly when you’re still dealing with afternoon highs consistently above 100.  The promise of those wonderfully lower temperatures prompted me to finally get my little patio in batter shape.  I dug up the bed, painted and hung a trellis, and planted bougainvillea.  I’ve really enjoyed the handful of mornings and evenings I’ve been able to sit out there, admire the handiwork, and enjoy a delicious meal.

This incredibly simple steak was made for sitting out on that patio.  I served it with roasted potatoes, a simple side salad, and a glass of wine.  It came together in the amount of time it took the potatoes to roast and was just the kind of meal that felt like a real indulgence. 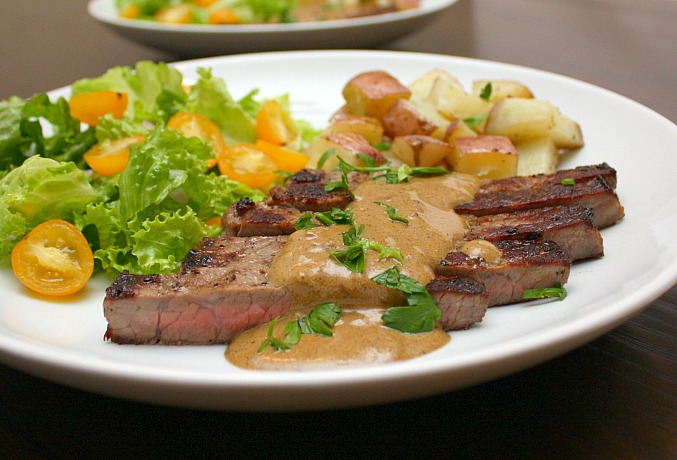 Ingredients:
1 TBSP vegetable oil
1 (1 lb.) boneless Sirloin steak, such as shell sirloin or skirt steak (steak should be about 1 1/4 in. thick)

Directions:
1.  Heat oil in a large skillet over medium-high heat. Season both sides of the steak with salt and pepper, then lay in skillet.  Cook, without moving, until well browned, about 2 minutes. Flip steak, using tongs, and reduce heat to medium.  Continue cooking until well browned on the second side. For medium-rare, cook about 5 minutes or until the internal temperature reaches 125 degrees F.  For medium, cook for about 6 minutes or until steak reaches 130 degrees F.

3.  Meanwhile, pour off all but 1 TBSP fat from the skillet.   Return to low heat and add shallot. Cook, stirring frequently, until the shallot begins to brown, 2 to 3 minutes. Add wine and increase heat to medium-high. Simmer rapidly for about 30 seconds and use a wooden spoon to scrape up any browned bits on the bottom of the skillet.

4.  Add broth and simmer until reduced to 2 TBSP, about 3 minutes.  Add cream and any juices from the resting steak. Continue cooking 1 minute more, then stir in mustard. Season to taste with salt and pepper.

5.  Using a sharp knife, slice steak about 1/4 inch thick, against the grain, on the bias. Arrange on two plates, spoon sauce over the top and serve immediately.

one year ago: carrot-apple-nut muffins

two years ago: Black Forest cheesecake, a treat created with love for my mom’s birthday.