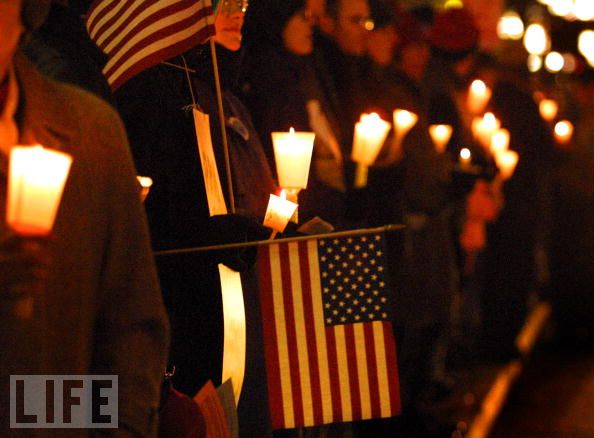 I’m sorry, readers.  There’s no food today.  I debated about writing this post because, after all, this is a food blog.  But the emotions I felt Sunday night as I watched the news coverage of Osama Bin Laden’s death took over.

You see, I was a college senior studying International Diplomacy and Broadcast Journalism at American University in Washington, D.C. on September 11th.  I remember the shock and awe we all felt in the nation’s capitol that day.  I remember seeing the director of student services, a woman so ambitious and hardworking, we’d really never thought her having emotions, break down in tears.  I remember asking Professor Chin what I was supposed to tell all the new freshmen living on my floor.  I remember the look on her face when she said, “I don’t know.  I feel like a failure.  We’ve worked our whole lives to make sure you kids never had to experience this.”  I remember seeing students cry in fear because they had yet to hear from family and friends back home in New York and New Jersey.  And I will never forget the deafening silence on our campus that day when what I’m guessing was about 700 students were sent back to their dorms on lockdown.  With that many students out and about, you’d expect laughter, music, and chatter.  Not on that day.  That day, the campus was silent, every student walking back to their rooms with their eyes to the sky, looking for the next plane.

Now, almost ten years later, I’m a teacher and big sister to a recent graduate of Army basic training.  And I’m scared.  I’m scared about retaliation in the wake of Bin Laden’s death.  I’m scared to feel that fear again.  I don’t want to lay down for a nap, the way I did late in the afternoon on September 11th, then get up to look out my window once more just in case I never woke up.  I don’t want my brother or any of our other American soldiers to be sent into harm’s way to deal with a swell in activity.  I don’t want to think of my brother feeling that fear.  I don’t want to spend my days wondering where he is and if he’s okay.

So today I won’t.  I will do my best to feel pride in my country and hope for a future where terrorists can no longer inflict terror.  I will take today to pray for our soldiers, our President, Afghani citizens, and the victims of September 11th.  I will take today to think of all the ways God has already and will continue to bless the U.S.A.