Here in Arizona, the Southwestern influence is especially strong during Christmas.  Many people celebrate with a candlelight church service and a big family dinner of posole and tamales.  This year, I’m bringing dessert and I wanted to make sure it would be one to impress.  I took inspiration from another New Mexican treat–sopaipillas.  Cinnamon sugar, Mexican vanilla, and honey meet cheesecake.  Que delicioso! 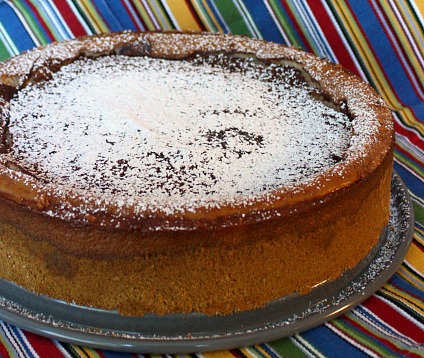 an “Apple a Day” original

1.  Preheat oven to 350 degrees.  Wrap a springform pan with foil.  (This will prevent water from the water bath getting into the pan.)

2.  Combine all ingredients for the crust and press into a springform pan, going halfway up the sides.  bake for ten minutes.  Allow to cool.

3.  While crust is cooling, beat cream cheese and sour cream until well combined.  Add vanilla sugar and beat on medium speed until creamy, about three minutes.

4.  Add in eggs, one at a time, and beat until thoroughly combined.

6.  Place springform pan in a water bath and bake for approximately one hour.

8.  Turn oven to broil and place cheesecake back in the oven.  Watch carefully and pull the cheesecake from the oven as soon as the cinnamon sugar has caramelized.  Place on a wire rack and allow to cool, uncovered, for three hours then cover and place in the refrigerator for at least three hours before serving.

9.  To serve, cut into 12-16 pieces.  Place each slice on a plate, then drizzle with honey and sprinkle with powdered sugar, if desired.

two years ago: Red velvet cake with cream cheese frosting, one of my most popular posts.