Leading up to Thanksgiving, I was really trying to be thoughtful about what I was eating.  I wanted to be able to enjoy my holiday meal (and dessert!) but I also didn’t want to throw away all the hard work I’d been doing to get myself into better shape.

I knew starving myself wouldn’t be the answer (it never is) but I also knew I needed to be extra aware of the ingredients I was using.  I saw this one on CBS’s “Sunday Morning” and immediately knew I had to have it.  Luckily, I have the Mesa Grill cookbook, so it was a done deal.

I wouldn’t say this soup is the ultimate in healthiness, but it isn’t exactly bad for you, either.  The molasses and honey do bring up the sugar content, but pumpkin is a great source of fiber, beta-carotene, potassium, and zinc.  Plus, the pomegranate seeds and pumpkin seeds used in the garnish are good for you, too!  I’d say it was a good compromise between feeling indulgent and being mindful of nutrition.  It also comes together in a flash, which is always nice on a busy weeknight.  I’ll definitely be having it again this winter. 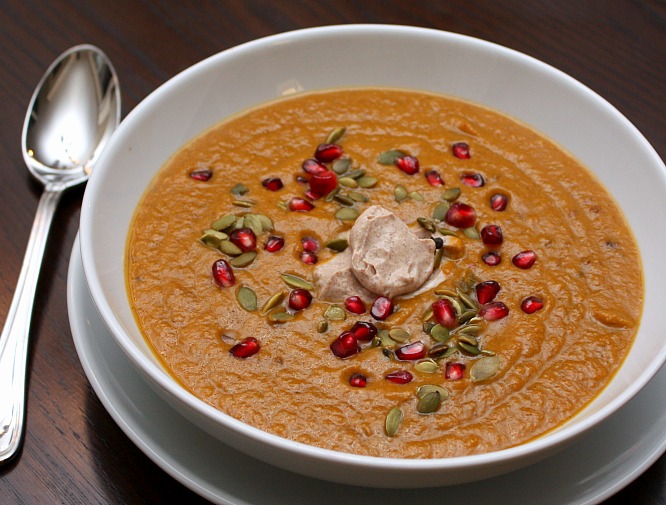 2 tsp. ground cinnamon (Mexican canela, if you can find it), divided

salt and pepper, to taste

1.  Bring stock to a boil in a large saucepan over high heat.

3.  Remove soup from the heat and whisk in 1/4 c. cream or sour cream.  Season with salt and pepper, to taste.

5.  Ladle soup into bowls.  Drizzle or dollop the cinnamon cream over the soup, then garnish with pumpkin and pomegranate seeds.

one year ago: The kickoff to my Twelve Treats of Christmas—peppermint bark.